Norway designed a new passport, and it’s making the rest of the world jealous 19 Nov 20 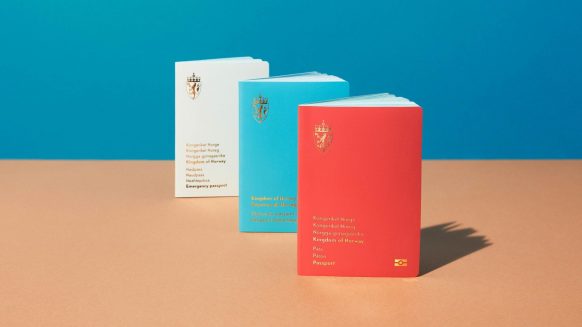 On a far more positive note, I thought I’d tout the horn of Europe’s Norway who has, in the past week, revealed a refreshed design for their ID and passport system. Norway’s passports moving forward will be some of the only ones on earth to feature multiple different colours (white, blue and red) and be professionally designed by a world-renowned graphics studio.

Neue Design Studio (who are based in Oslo) won the contract after presenting a concept to the Norwegian Government featuring Norway’s sweeping landscapes. This has flowed through to the final design which features illustrations of the country’s landscape that change from day to night under UV light. That design point is especially impressive considering that practically the UV print on passports is used to help prevent fraud and maintain ID security.

Neue claims that the page designs of the passports are illustrations of single parts of a wide Norwegian panorama. They also wanted to show contract in the landscapes and climate of Norway.

“The design had to create a sense of belonging and connection across age, gender and regions in Norway.” Benjamin Stenmarck from Neue claimed.

I think the re-design while being extremely aesthetically pleasing, brings up a fantastic point about Government ID documents and the way in which they can feature both practicality and design. When I originally read about how Norway’s new passport has the feature of changing an image under UV light, which has classically been a security feature of passports. I thought, why can’t Government documents be attractive as well?

Interestingly not only is the Norwegian travel document very attractive but the design represents an increase in security from the previous version of the passport and ID documents. Norway border security and immigration say that the new passports are totally compatible with their current systems and processes as well, which represents a massive benefit of making the change.

Norway will be rolling the new passport designs out gradually with passports getting updated as their citizens require a new one (when their previous passport is out of date). Citizens can request a new passport in the meantime if they desire the new design.