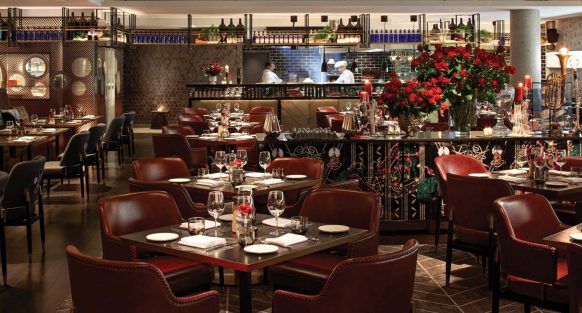 It’s been almost four years now since the Melbourne iteration of QT’s hotel chain opened. The hotel still looks fresh when placed against some of its competitors in the city and whilst the rooms and service a far beyond adequate for what is considered standard for Melbourne’s 5-star hospitality scene in the 21st century, where the QT stands out is it’s commitment to small to large-scale corporate events in the slightly more boutique market.

I’ve been to three smaller conventions held at the QT Melbourne now (and one slightly larger event), and funnily enough, all three have managed to do something quite difficult to do at your typical run of the mill death-by-PowerPoint conference. They’ve managed to make you feel comfortable. Any hotel on earth tends to struggle with that one feeling of comfort.

Typically, when you stay in or attend a 5-star hotel for an event there’s an air of a breeze in, breeze out feeling about it. You know you’re there for one night only and while you’re well taken care of, it still isn’t quite like staying in your own bed.

At the QT Melbourne, and funnily enough, you still don’t feel like you’re staying in your own bed. But the welcoming and warm atmosphere of both their rooftop and second-floor bars combined with the top class beverage and food service and a social experience-enhancing layout allows you to feel comfortable sitting down for a drink either with clients, colleagues or on your own and in the absence of any reason to really do so. It makes the hotel’s facilities an extension of your room, allowing you to feel comfortable enough to use them with ease.

The QT’s rooftop bar, however, is a brilliant addition, and whilst the idea of a rooftop bar isn’t all that new, the execution of this one is especially perfect. It allows for quite comfortable and large-scale networking events without being obtrusive on the remainder of the hotel’s operations. Last year, in fact, I attended a post-business hours meeting which was held in the QT’s Secret Garden (a rooftop herb garden which sits adjacent to the QT Rooftop), which at the time wasn’t open for hire, and frankly, it was one of the most fantastic after-hours drinks venues I’ve ever been to.

It needs to be mentioned that the venue’s physical location is also another important factor. It sits on Russel Street within the CBD limits and is a short walk to luxury shopping on Collins Street and Bourke Street. That aside, the QT sits a block down from Parliament, a short tram ride to both Crown Casino and the MCG and is two streets from the Flinders Street train station.

It’s important though to distinguish that the QT Melbourne is not in any way a large-scale event venue. The proverbial crown for those venues in Melbourne still goes to the Palladium (which is the largest seated corporate venue in the city). It is very much an alternative and boutique conference and meeting venue. It’s also in no way quiet about that fact and trumpets it.

That, to me, is what is most important of all. That a venue knows what it is, and it is proud of that fact. They also don’t profess to be bigger and are the absolute best at what they do.

The QT Melbourne is located at 133 Russel Street, Melbourne and you can contact them by visiting www.qthotels.com/melbourne/.