Air New Zealand Chief Marketing and Customer Officer Mike Tod says that as the airline operates some of the world’s longest flights, such as the upcoming Auckland-New York service at up to 17 hours 40 minutes one way, it is committed to putting more comfort into flying.

“We have a tremendous amount of development work underway looking at product innovations we can bring across all cabins of the aircraft,” said Tod 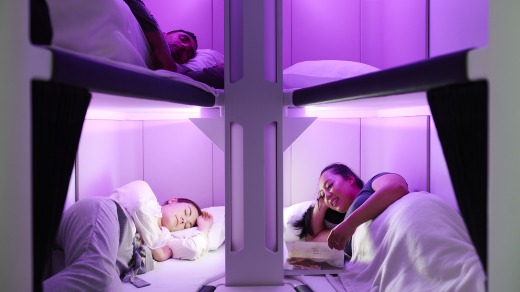 “A clear pain point for economy travellers on long-haul flights is the inability to stretch out. The development of the Economy Skynest is a direct response to that challenge.”

Air New Zealand will make a final decision on whether to operate the Economy Skynest next year after it has assessed the performance of its inaugural year of Auckland-New York operations.

The exact positioning of the Economy Skynest within the aircraft has still to be confirmed, however, it will be in the economy cabin. The pods, which will be in excess of 200cm in length and over 58cm in width, will include a full-size pillow, sheets and blanket, ear plugs along with privacy curtains and lighting designed for sleep.

Other features such as separate reading light, personal device USB outlet and ventilation outlet, are being looked at.

When asked about the pricing of the product, a spokesperson for the airline said: “We have yet to determine the costs and are still assessing the commercial proposition and viability of this product.”

Also, the airline said that children won’t be allowed to use the new pods: “The Skynest is designed to be used by adults with each pod for one person.”

Commentators on social media have been full of praise for the idea.

“YES!!!! I can never sleep in normal seats, it’s exhausting! Take my money,” said one.

“That would be a kiwi dream come true!” wrote one commentator.

“Cool photo, looks like a backpackers up in the air,” was another.

Although, some said there may be drawbacks: “Sounds good as long as doesn’t include a snorer.”

Nicknamed “cuddle class”, the design consists of a row of three economy seats that convert into a “couch” through folding the armrests and raising the padded footrests into a position parallel to the seat.

Designed for couples and families, the Skycouch requires the purchase of three seats but a couple can buy the extra seat at a 50 per cent discount.

The official advice is as follows:

For the latest information please visit the Smartraveller website.

The new service will be the first non-stop link between Australasia and New York.

Fares are available now and customers can book flights between Auckland and New York through to 4 January 2021.